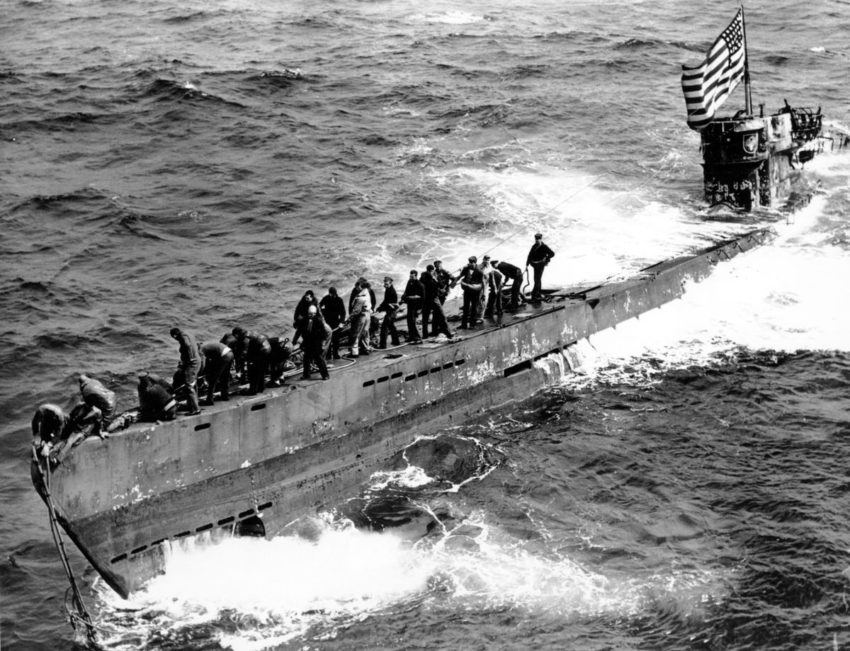 In 1943 a little known operation brought together the Canadian Armed Forces and the German Navy at the mouth of the Chaleur Bay. On the German side, Operation Kiebitz planned the recovery of some U-boat officers who had escaped from a prisoner-of-war camp in Northern Ontario by having them picked up by a U-boat. On the Canadian side, Operation Pointe Maisonnette put in place by the Navy and by the Army sought to apprehend these escaped German prisoners of war and seize the submarine sent to recover them.

During the Second World War, several German prisoners of war were incarcerated in Canadian camps. Canada’s geographical location and climatic conditions supported this choice. Several prisoners, considered dangerous because of knowledge or abilities that could be advantageous to the enemy, or because they belonged to groups deemed dangerous, were kept under close watch far from the main scenes of the conflict.

Despite the distance of these camps from the Atlantic, many prisoners put together escape plans and, in certain cases, acted upon them. This was the case for German prisoner Otto Kretschmer, instigator of an escape plan that resulted in a vast military operation involving the German Navy and the Canadian Army and Navy. The operational strategy called Operation Kiebitz by German authorities had as its objective the escape of German prisoners and their boarding a submarine waiting for them in the Chaleur Bay.

The Canadians planned counter-attack, Operation Pointe Maisonnette, had two goals: to capture one of the escaped German prisoners and to capture the submarine whose mission was to take the fugitives on board.

I. The German prisoners’ escape plan

The escape thought up by Otto Kretschmer had its roots in Camp 30, in Bowmanville, Ontario. Located on Lake Ontario, some eighty kilometres from Toronto, this camp holds, behind its walls, prisoners of war that have exceptional combat records and are likely to attempt several escapes.

In the fall of 1942, Officer Kretschmer, nicknamed the Atlantic Wolf, devises an escape plan that would allow four officers, including himself, to escape from the camp. The other three are also submarine officers: Kapitänleutnant Hans Ey of U-433 sunk on November 16,1941, Horst Elfe of U-93 sunk on January 15, 1942 and Joachim von Knebel-Döberitz, executive officer. In a L’Action Catholique article published in 1957, Kretschmer explains how he came to choose Pointe Maisonnette as the rendezvous point.

I had an atlas that I got in England; it was a nice school atlas that we could use to study the Canadian Atlantic shoreline.

At the point where the St. Lawrence empties into the sea, along the shores of its wide mouth, we located a large number of bays. One of them, called the Chaleur Bay, attracted our attention because of a cape that protruded into it and which would favour an escape. The cape was called Pointe Maisonnette.

We could easily reach Pointe Maisonnette in three of four days if walking conditions were the least bit favourable. Once there, it would be possible to board a submarine sent by Admiral Dönitz. The critical part was convincing the BdU, the Commander-in-Chief of the submarine fleet, Admiral Dönitz, to send us a submarine.

Through the spouse of von Knebel-Döberitz, Admiral Dönitz’s secretary, prisoner Kretschmer enters into contact with the Commander of the Kriegsmarine. In an encoded letter, he shares his intentions to escape and proposes the location for the recovery of the fugitives by submarine. After he obtains the Admiral’s agreement, preparations to achieve the escape are undertaken. The escape from camp will be made through a tunnel whose exit is fairly far outside the camp and the barbed wire. To fool the guards, they dig three tunnels at once.

After four months, two of the tunnels are abandoned so that efforts can be concentrated on the third one. More than 150 men work on the tunnels, taking turns on night and day shifts. Some men prepare the materials required for the prisoners’ escape, such as dummies to substitute for the escapees, false identification papers, civilian clothing and goods.

During the work, encoded messages are sent to Germany, providing updates on their progress. In August 1943, as the work is progressing nicely, a communication through encoded letters and radio transmission sets the date for the escape of the four German prisoners. Another encoded letter from Admiral Dönitz indicates that a submarine, the U-536, commanded by Lieutenant Schauenburg, will surface for two hours every night over a two-week period starting September 23, 1943. Therefore, Kretschmer and his three fellow officers will have 14 days after their escape to make it to the rendezvous point of Pointe Maisonnette in the Chaleur Bay.

One week before the date set for the escape, plans are abruptly changed because of two incidents. One night, while the prisoners are sleeping, the ceiling above which they piled the earth from the tunnel caves in. The earth removed from the tunnel is hidden in the dormitory ceilings. The guards, alerted by the racket and intrigued by the quantity of earth that fell from the ceiling, begin looking for its source. As camp authorities did not discover the third tunnel, Kretschmer, faced with the urgency of the situation, decides to take action the same night.

However, on the day he proposes this, a second incident occurs which puts an end to the four German officers’ escape plan. While a prisoner digs close to the camp fence to fill his flower boxes with earth, the earth beneath his shovel gives way, uncovering the third tunnel’s exit to the guards. The prisoners who were to escape are arrested and put under close watch.

What Kretschmer and his companions are unaware of is that the Royal Canadian Mounted Police has known about their plans for quite a while. In fact, the RCMP was working with Canadian Military Intelligence, who managed to decode the contents of the messages between the prisoners and the German Admiralty.

Amongst other items, they have their hands on maps of Eastern Canada. Little, Commander of Canadian Military Intelligence during the Second World War, tells how they discovered the escape plan: “A suspicious parcel was sent to one of the German prisoners at the Bowmanville Camp. After opening it cautiously, we found a map for a rescue operation in Chaleur Bay. Alerted of this, I went to see Admiral Nelles, as well as the Army officer responsible for the prisoner of war camps, to explain the situation to them and to propose a plan.”